Old train track sleepers are really heavy, really strong, and using them can ease your conscience as you are not cutting down new trees to build your house. They are however likely to have been pressure treated with seriously dangerous chemicals which keeps them strong for a long time but makes them pretty toxic especially when cutting them. So be sure to wear good respiratory protection when cutting.

This guide will run through how to make these super heavy woods in to super heavy window frames. You are going to need a bunch of tools which I will name during the post. I made this windows with Neil at Eco Caminhos in Brazil.

So first up, select you wood. We are going to try and make this frame with the outside surfaces of the sleepers forming the inside of the frame. So we chose a couple of pieces with nice straight sides. However if you have access to all the tools we used here then you should be able to use your cut surface as the inside as it should be nice and smooth.

The first major hurdle you are likely to encounter with train track sleepers is the bolts that were used to hold the train tracks to the wood. In our first house we had a local labourer cut the woods down the centre with a chain saw, he cut around the bolts and then he used a crow bar to pry open the two sides. We did not want to do that this time however because the cut you need to do to achieve this is very dangerous, and it will also created a very rough face where the chainsaw has been cutting, so it would not be so easy to fit your windows in to that space.

So we tried to drill from the other side and knock them out. That did not work

So we decided to move away from the chainsaw around the bolts idea. And use a circular saw first. So next you find your centre point at each end and mark a line down the middle. A chalk line is good for this but a pencil will do fine if not.

Next we used a circular saw (or ´skill´ saw according to this Canadian) to cut the line. However as you can probably see the saw is not long enough to go all the way through. So turn over the wood, mark the centre again and cut along the length of the wood. 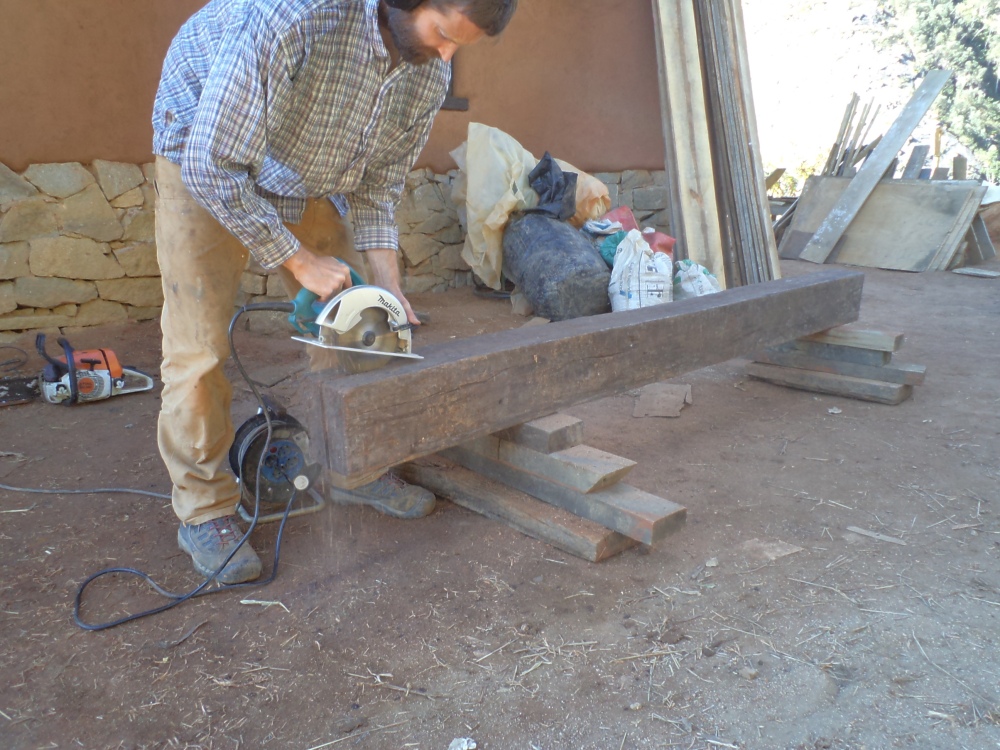 So you should now have your train track sleeper with a groove down each side. This will be your guide for your next saw – the reciprocal saw, which can cut through metal and wood. Usually this saw is not so accurate but with the guides you cut on either side it should cut a nice straight line all the way through. You should get a couple of blades if you are cutting a lot of windows as the metal will blunt the blades a lot. So maybe when cutting through the metal you can switch blade, and use the same blade each time you get to the metal, and the original one when cutting the wood.

Anyway we couldn’t find a reciprocating saw so we decided to use the chain saw. You have to cut as close to the bolts as you can, then prise apart the two sides using mallets, wood, crowbars, and maybe a hench Brazilian. The bolt will then be left sticking out of one piece of wood so you can either try and unscrew them with a wrench, or just cut them off with an angle grinder

Next you need to take your planer to the beams. The side we cut with the chainsaw we left as it was too rough and will be going up against the cob anyway. Take off as much as you need with the planer to achieve the surface you want. You can leave some of the rusticness by not going too deep.

Now use a straight edge to see if you have planed it nice and flat. The flatter the better as this will receive the window easily. If you are using a sealant around your windows, which you probably will, then you can always fill in small gaps after the window is in. 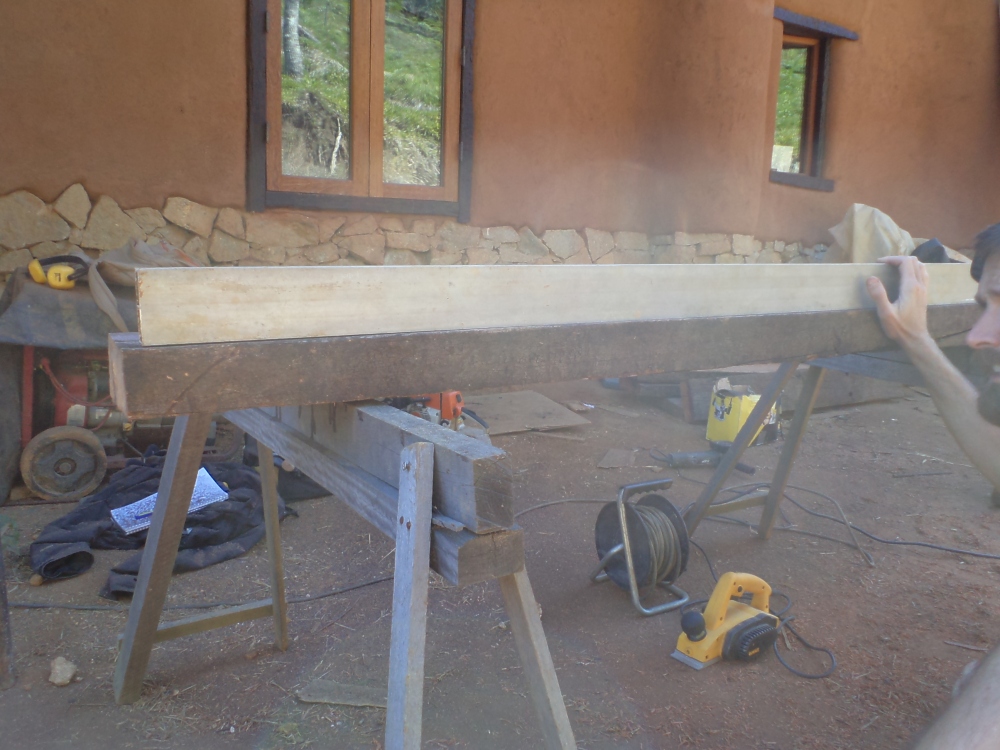 I mentioned above that the chainsaw cut sides were going against the cob and as such do not need to be planed, however the front edge will still show so you may want to cut it straight. If you had used a recip saw then you probably won’t have to do this bit. Just use a circular saw to cut away the front face, no need to do the back too.

This next cut is a tricky one so I would recommend beginners take a piece of scrap wood and do some test cuts. You are going to cut the sloped sill with a circular saw. This is the bottom horiztonal piece which needs to be sloped away from the building to shed rainwater that lands on it. You should do some test cuts to have a look at your desired angle. We used 15 degrees but actually you may not need much more than 9 or 10 degrees. Make sure to check that the saw goes all the way through when you are cutting the angle, although if you are left with a small dip this isn’t a problem

As you can see from the image below, when the angled piece is cut out there will be a small dip but actually this isn’t a problem as the window can sit on top and this drop will act as a further rain barrier. 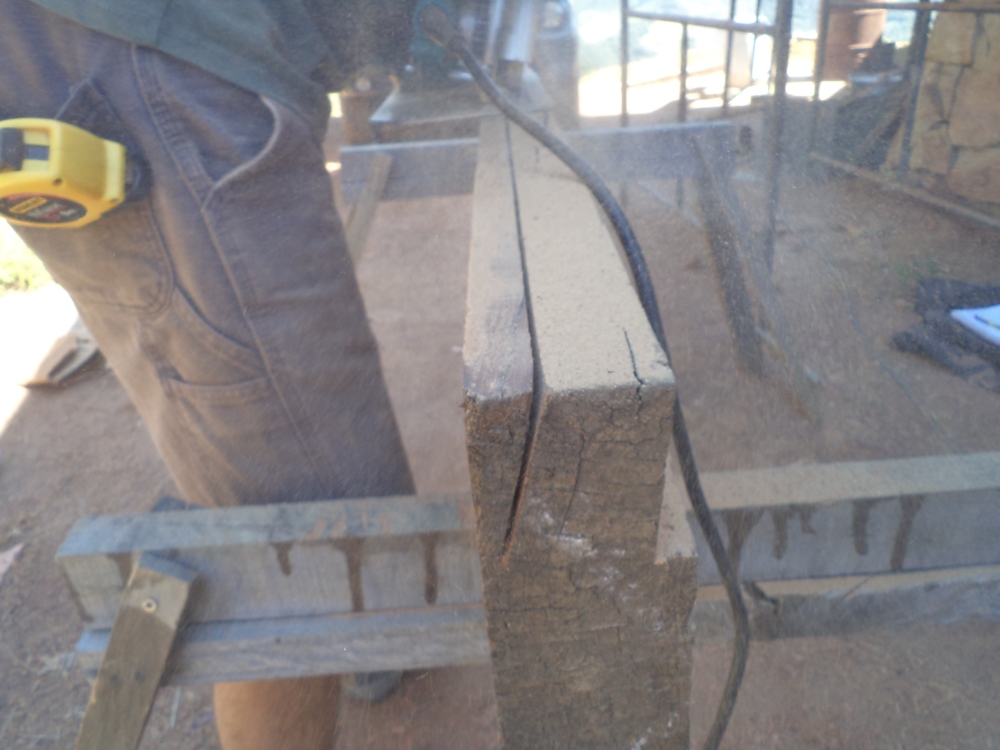 Set your circular saw really shallow so you don’t go in to the timber, and only cut the angled piece out. We set up a guide that you can see below to keep the line really straight.

Stand back and admire your beautiful window base

So you should have a base that looks like this below. The only thing I didn’t take a picture of was cutting the drip guard underneath the base. You can see this on the bottom right of the wood in the picture below. Just take the circular saw all the way along the length of the wood to cut this groove. It will stop rain from rolling under the window and into the wall so it is an essential part of your frame.

You can make your top plate the same way as I have described above, but it just doesn’t need the dip by the sloped part. Apart from that it is basically the same, with a drip guard too.

Next take a sander to the parts of the wood that are going to be visible. It will probably take a long time as the saw may have burned parts during the cutting process. We tried using a grinder and although it removed the black parts, it created new scratches which were then difficult to remove with the sander after, so the planer was the best tool overall.

So, now you have your top and bottom horizontals…

Next you need to cut your vertical pieces to size. These are much easier than the horizontals as they just need the front face cleaned up to the standard you require. The rest of the faces will be in the cob so do not have to be cleaned at all.

As a note, the verticals will sit further back in the cob so they will not line up unless you cut them down the length of the wood. This is because they sit behind the rain slope, not hanging over it.

Next up head to your cob wall and shoot a straight line where the window will go. If you need to, cut the cob straight as the drip guard needs to hang a good few centimetres in front of your finished wall.

Next you need to make the space where your base sits level. It is better to build slightly too high then chisel out your space. Although this method takes longer, you will know that your base is not going to move once you have placed it. If building a fresh cob base you risk it shrinking at different rates and becoming unlevel as it dries. 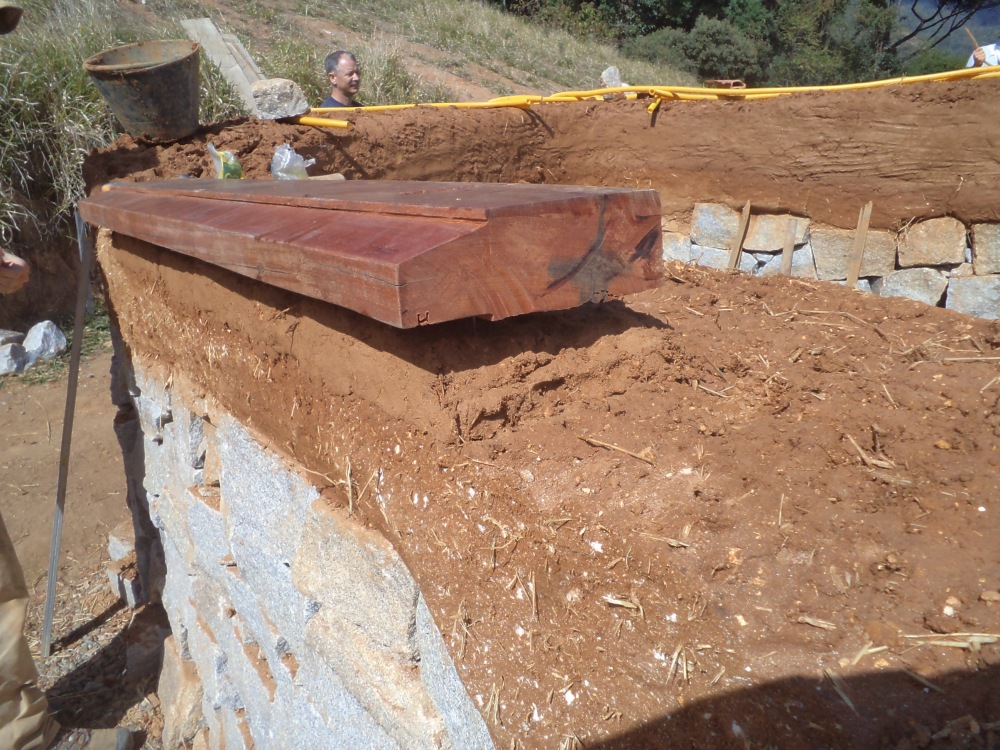 Check you are level both ways.

If you made a mortise and tenon to hold your verticals in to the horizontals then use some silicon in the tenon to stop it filling with water and rotting out. 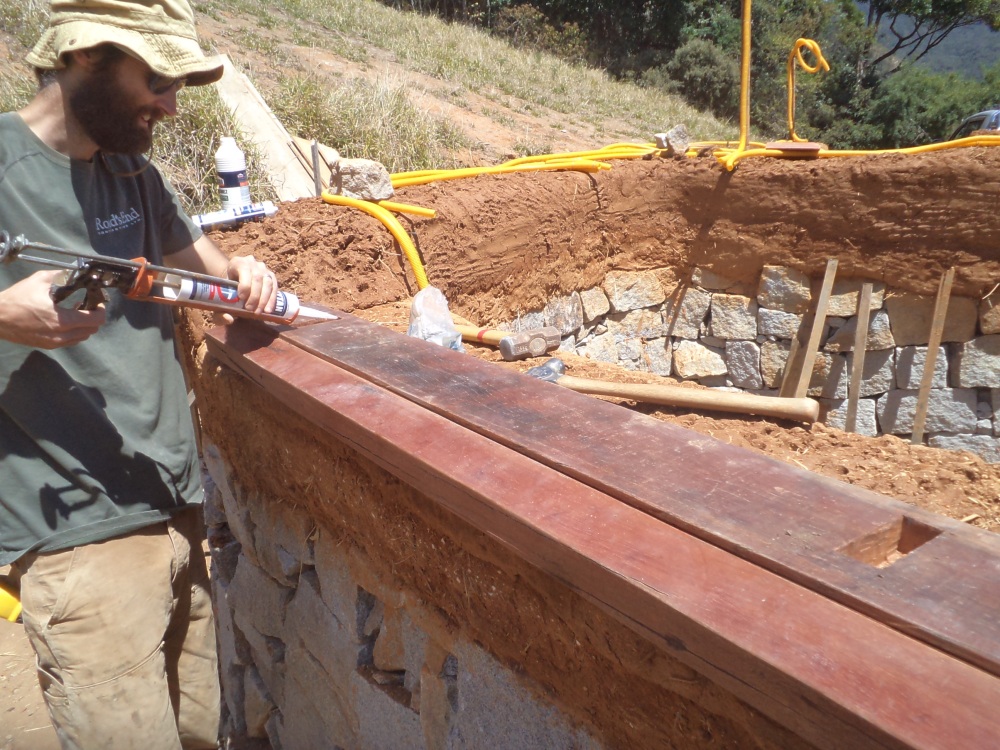 Carefully place your vertical, level, and brace with a temporary strong brace.

Place your second vertical and brace strongly to the ground. We used a temporary brace at the top because we plan to build our cob up and around the verticals, and cut them to size when we know the exact height of the first floor. At this point we can cut them and fit the top lentil. You can see the top lentil in the foreground of the picture on the scaffolding. 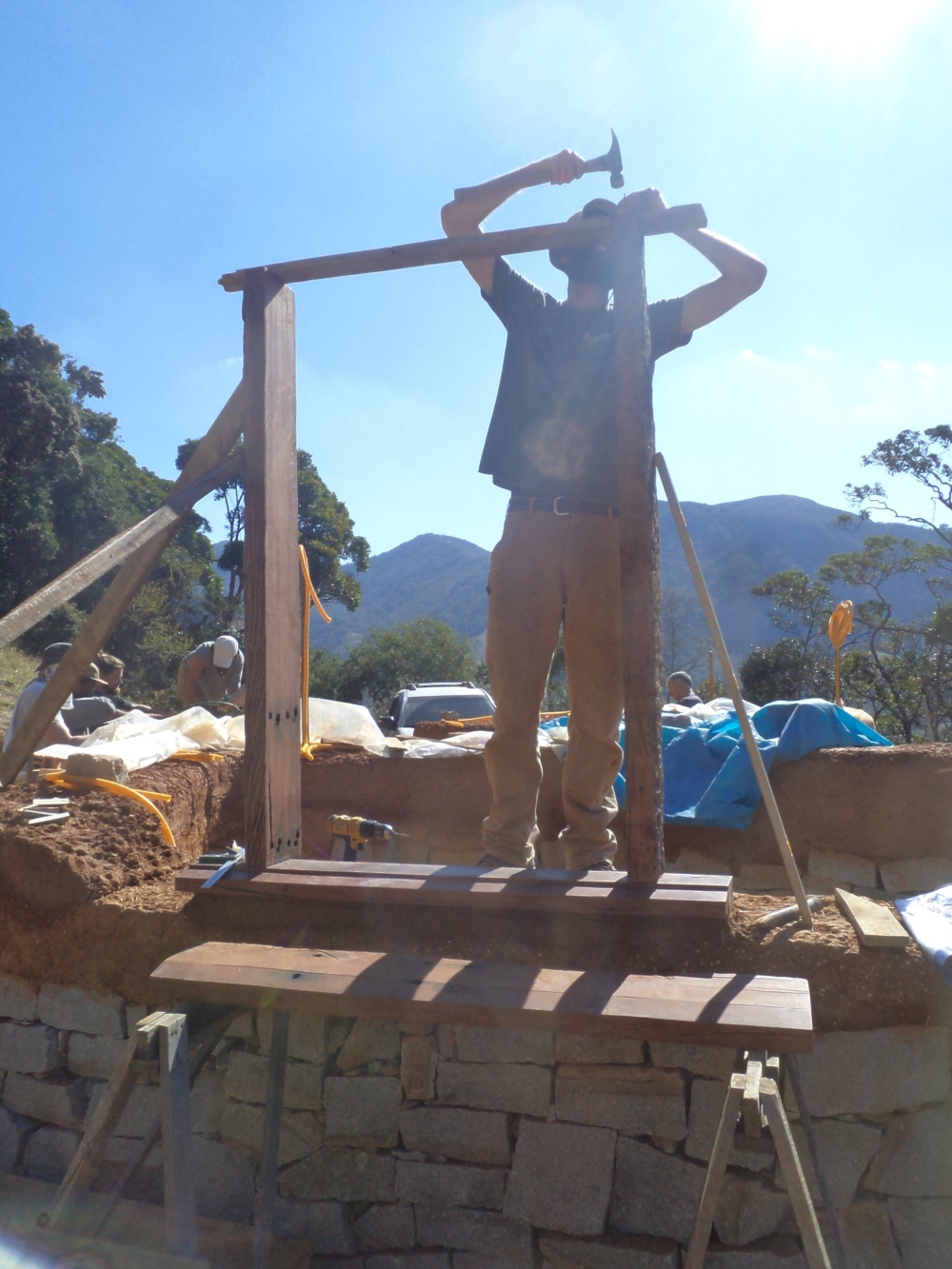 When everything is in place and really secure you can start pounding your nails in to the places which will sit against the cob. This is necessary to hold the cob in place as it dries, and once it has dried, to hold the window in place when the braces have gone.

So there you have it, building and fitting your rough openings for your windows using a re-used, super hard, incredibly beautiful wood.

Good luck to you and your saws. And here is a little version of the window I made using the same process